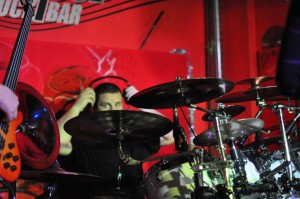 Bori Praper was born in 1976 in Slovenia. Graduated in English language and literature from the Faculty of Arts, University of Ljubljana, Slovenia, in 2000.

Worked as a translator of technical, literary and scientific texts  – mostly in the field of EU legislation, contemporary history and audiovisual industry – for more than twenty years.

Also a musician (composer, producer, multi-instrumentalist and lyricist). Written and recorded music for numerous audiovisual projects and public events, including dozens of full-length theatre performances. Produced many works by other authors as well as recorded for them, most notably contributing drums as a session drummer. Work published on more than 40 digital releases, 15 audio CDs, and two video DVDs.

Finally, a writer who managed to finish his first novel in English at the tender age of 36, after a few failed literary experiments over the years.

Following a six-year stay in Izola on the Slovenian coast and then a five-year sojourn in Berlin, Germany, in 2017 Borut migrated to warmer climates yet again. He currently lives in the Canary Islands with his wife Monika and a flurry of free-range geckoes, focusing predominantly on translating, writing, horticulture, and tinkering with Cynicism Management, his progressive / alternative rock band; Ray Kosmick, his psychedelic rock / indietronica / soundtracks alter ego; and a few other side projects.

If you’d like to be the first to know about Bori’s new books and music releases, sign up for his new release mailing list. Subscribers will not receive any spam – only updates on new developments and free music offers every two or three months, on average. Your email address will never be shared with anyone else and you can unsubscribe at any time. If you’d like to stay in touch, you can also write directly to .