As both my novels, Cynicism Management and Pendulum Pet, had been reviewed meticulously for any leftover typos and “brain farts” before the corona\samizdat paper editions were published, I have now updated the electronic versions as well. Also, both novels have just been updated and re-released on Amazon. The “Universal Book Link” below (and above) will take you to a page containing links to all online stores that sell them, which hopefully includes your favourite e-book dispensary.

The price for each one is exorbitant, of course, amounting to as much as EUR 3.99. If a particular store sells it for more, it is their arbitrary decision – in that case, please use the links to find a store that sells it for the price I requested.

A new single by Rok Predin has just been released.

A new single by Rok Predin has just been released.

The new album – or, more precisely, the radically renovated 10th-anniversary edition of Cynicism Management’s first album, “Tit” – is out. You can grab it on Bandcamp (free / pay what you want), in most digital stores, or hear it on your favourite streaming service.

CLICK HERE for more detailed information about the project.

The girl from the post office was extremely good once again: recently, she delivered the second part of Rick Harsch‘s communal novel The Assassination of Olof Palme to our currently slightly isolated volcano in the middle of the Atlantic. Both volumes of the rather extensive novel, to which I’ve had the honour and pleasure of contributing quite a few pages, are now available from corona/samizdat.

About The Assassination of Olof Palme from Rick Harsch’s blog:

Induplicatable, uncategorizable, The Assassination of Olof Palme, is a two volume anthological novel, mostly written by Rick Harsch, who orchestrated the contributions of between 40 and 70 writers, all seamlessly absorbed by the novel, the skeleton of which is the autobiographical narration of Rick Harsch, the novelist, and Rick Harsch the character and sometime novelist, who is revived to be enlisted as comrade and investigative novelist, as the concept of autobiographical, at the behest of a Rick Harsch is expanded to include whatever irks or has irked him that relates mostly to three main topics: the post WWII pampering of Nazis by the allies (which means the inclusion of what is known as the Gladio affair and particularly as that relates to Italy’s years of lead and more particularly the anarchist Giuseppe Pinelli’s death in 1969, which is known most as the titular accident of Dario Fo’s Accidental Death of an Anarchist; second, the degradation of the United States upon the assumption to power of Ron and/or Nancy Reagan, particularly as it relates to the Iran/Contra affair, particularly as that relates to the problem of pampered Nazis; and finally the assassination of Olof Palme in 1986, particularly as the first two topics relate to that murder.
The book makes use of too many tricks of the writing trade to list here, including Tamil Sangam poetry a form from about 2 millenia ago, sonnetry, the government memo, the menippean satirical (doubly so), stage whispers (Nancy Reagan is a star), phone tapping, Dada-guided cabaret thrusts, mimicry, and many more.
Though the book begins to a degree fragmentally it rapidly coheres into a promise no sane reader would expect to be fulfilled that is yet fulfilled in a gutwrenching ending of inordinate pathos.
(Originally intended to be four volumes, Harsch decided the expense would be too great for the reader and limited the number of contributors, compressed a screed, clipped a wing or two, and thus the novel ends with this second volume.)

In its strategic development document titled “Our Diabolical Plan”, the evil megacorporation in my more than ten-years-old comic sci-fi satire Cynicism Management ponders how to force depraved little nanorobots on the entire population and thus transform people into perfect consumers – out of altruism, of course, to prevent any other corporation with poorer commercials from doing it first. Apart from the most standard ways of disseminating nanotechnology (the food chain, waterworks, chemtrails) they also consider cooking up a deadly flu pandemic and vaccinating everyone.

A few days ago, the novel Cynicism Management was finally also published in the United States – on actual paper, mind you! – by the publisher River Boat Books. I suppose I should be happy that this extensive collection of particularly preposterous jokes has aged so well… But instead, I am overcome by horror, as in the meantime, it has in fact become completely impossible to write comic sci-fi satires any longer: now, it appears that many more people than ever before actually BELIEVE such particularly preposterous nonsense.

Lately, I’ve had this nagging feeling that I no longer write satires, but rather perform in them – probably for an audience of naughty pangalactic jokers, who are rolling on the floor laughing.

The best way to grab a copy is through Amazon.

A tangible, paper edition of my first novel “Cynicism Management“, now already a ten-year-old satire with sci-fi elements, has just been released in Slovenia by Rick Harsch‘s independent press corona/samizdat. The pocket-sized paperback is available from https://coronasamizdat.com for a measly 12 € plus postage.

The novel contains links to music (allegedly) recorded by the fictional musicians appearing in the story – to the actual soundtrack for this literary work. Check out this post if you wish to download it for free… Or stream it from SoundCloud:

The original soundtrack for the novel Cynicism Management: A Rock ‘n’ Roll Fable has just been updated with new versions of songs.

The original music for the novel is now more than ten years old and my technical capabilities as well as expertise in music production have improved quite a bit during the last decade. About a year ago, I therefore started releasing the so-called “augmented” versions of the relevant tracks (not remixes, but thoroughly reworked versions of songs – click here for more detailed information about the project) in honour of the upcoming River Boat Books (United States) and corona/samizdat (Slovenia) editions of the novel. All of the “rejuvenated” songs will be published about a year from now, on the official 10th anniversary of the original Tit, as a new music album titled Tit Augmented. However, the new versions of all the songs are already available to stream from our SoundCloud page as well as to download for free and/or stream from this post or from this page on my official author website. So if you’d like to be among the first to hear them, that is the place to be. 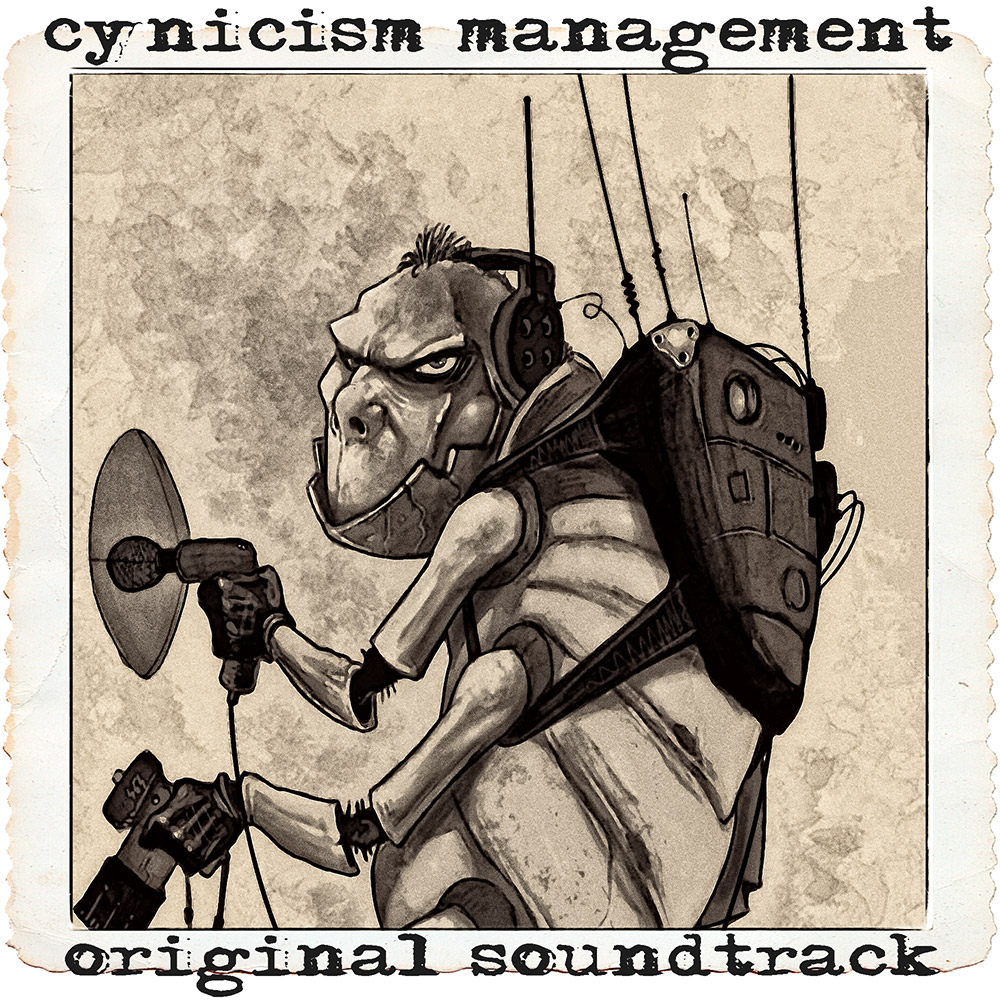 The Cynicism Management novel contains references to songs, recorded specifically as a soundtrack for the story. The music is in no way crucial for following the plot, so you will miss nothing if you cannot or will not listen to it. Besides, it is always possible that you might like the writing but hate the soundtrack… or vice versa. The novel as a purely literary work is my top priority, and therefore I by no means wish to force my musical escapades on you.

However, if the idea of songs enhancing the story’s atmosphere appeals to you, feel free to use the relevant links in the novel or the dedicated SoundCloud player below to have a listen.

Should you wish to download the complete collection of tracks mentioned in the book, you can do so here. I apologise for restricting the download to subscribers, but it is crucial for me to be able to inform you of any new literary and music releases.

Note that the tracks from the 2011 Cynicism Management debut “Tit” have recently been reworked (or “augmented”) in honour of the 2020 River Boat Books (United States) and corona/samizdat (Slovenia) publications of actual paper books. Next year, on the “official” tenth anniversary of the aforementioned debut, the modernised versions of songs will be released as a standalone album. Until then, the free download of these tracks is only available from this page.

Another Place Another Time (Augmented), the twelfth (and final) track for the upcoming Cynicism Management release Tit Augmented, planned for about a year from now, has just been published on SoundCloud. Incidentally, this happens to be my absolute favourite on the ten-year-old debut album Tit by Cynicism Management.

This wraps up the project of “radically renovating” the songs in time for the publication of my first novel, which the music was actually written for: as it happens, after all this time, Cynicism Management (the novel) will be released this autumn both in the United States (by River Boat Books) as well as in Slovenia (as a part of Rick Harsch’s corona/samizdat, an independent imprint of Amalietti&Amalietti). For this occasion, I decided to thoroughly rework or “modernise” the old tracks – simply to do them justice, as the original songs had been produced well over a decade ago in much less than ideal circumstances. Next year, on the “official” tenth anniversary of the aforementioned debut, the new versions will be published as a standalone release.

Should you want to know more about this project, click here.


ANOTHER PLACE ANOTHER TIME

Another place another time
Oh we used to be whole

Herbal Haze (Augmented), the eleventh (and penultimate) track for the upcoming Cynicism Management release Tit Augmented, planned for about a year from now, has just been released on SoundCloud. Should you want to know more about this project, click here.

Welcome dear tainted dawn
Are you to stay here long?
I plan to stay away
From your big brother day

Hello my trusted friend
Ready to make amends?
I’m yearning for your touch
Why cope with drudgery much?