TV Turns On You (Augmented), the tenth track for the upcoming Cynicism Management release Tit Augmented, planned for about a year from now, has just come back from mastering. Should you want to know more about this project, click here.


TV TURNS ON YOU

TV turned on me
I can almost see now

Anger bursts out misdirected
Preachers spread blight unsuspected
Omens portend we are failing
Utter disgrace parasitic
Liars tell lies sold out assholes
Sense that we might have things left there
Malice! We waste good intentions
Straying so far from redemption
What a relief this can’t happen
Ever to me, I just watch some
TV

We’ve just finished Bad Bad Boy (Augmented), yet another track for the upcoming Cynicism Management release Tit Augmented, planned for about a year from now. Should you want to know more about this project, click here.

I’ve been a bad bad boy

I’ve been watching her grow old
Never penetrated, cold
I have never even grasped
The sin

Here goes Right Humpster, one of the tracks from the upcoming Cynicism Management release Tit Augmented, planned for about a year from now. Since I’ve now managed to make it two-thirds through the entire album (I hope to finish reworking the last four songs by the end of June), I’ll stop explaining what this little pet project of mine is all about. Should you be interested in the entire endeavour (and the reasons for it), click here for an elaboration.

Right, Humpster!
Do your nasty thing!
Be what you are!
Let the frolicking begin!
Her bulging eyes at three a.m.
I really wish I’d give a damn
My eyelids kiss
My upper lip
Indeed this is a vile routine

She’s watery eyed like frogs in heat
Ignoring me, my every plead
When bonecrumbed dump
Spills everywhere
Repugnant, yes! But it’s the end

Four-Circle Penile Substitute is the seventh track from the new Cynicism Management release Tit Augmented, planned for about a year from now. It is also the seventh song to appear in the book that it has actually been written and recorded for: Cynicism Managment (A Rock & Roll Fable), which will – because of the end of the world (as we know it) – NOT be published by River Boat Books next month as originally planned.

My publisher has let me know that he is, against all odds, still planning the book release for September. However, in light of the ongoing apocalypse, making any sort of firm plans at this time is pretty much wishful thinking, so we’ll all just have to wait and see what happens. In the meantime, I will keep tinkering away at these tracks. As reworking and remixing them has actually turned out to be a much more complex and longwinded process than I originally expected, the delay has, as far as I’m concerned, actually come in handy. Unnecessary haste would certainly not contribute anything constructive to this project – especially because I don’t only want to give these ten-year-old songs a “new coat of paint”, but instead reinvent each of them at least a little. As far as the following tune is concerned, I feel that this mission has been accomplished.

Whence She Came is the sixth track from the new Cynicism Management release Tit Augmented, planned for about a year from now, that I managed to rework and remix… So I’m halfway through, yay! It is also the sixth song to appear in the book that it has actually been written and recorded for: Cynicism Managment (A Rock & Roll Fable), which will NOT be published by River Boat Books in a few months as originally planned because of the end of the world (as we know it).

It is a rather “rude” track with what can be interpreted as a creepy ending, appearing in one of the many thoroughly politically incorrect chapters of the novel it was written for. However, I’m pretty sure it’s awfully cute if you happen to know what it’s about. Hopefully it’s even nicer now that it hopefully sounds a bit better than it did ten years ago.

Tit is the fifth track from the new Cynicism Management release Tit Augmented, planned for about a year from now. It is also the fifth song to appear in the book that it has actually been written and recorded for: Cynicism Managment (A Rock & Roll Fable), to be published by River Boat Books in a few months.

More than ten years ago, Monika, the voice of Cynicism Management, decided it would be a good idea to study growling. This is one of the results of her artistic pursuits. And yes, she could do it live on stage as well, which was something that people would usually not expect.

Then I go and grab a beer
Promoted by a tit
I’ve heard beer’s good for mother’s milk
So I think, well, that’s it
Of course the john’s adorned with tits
To get me in the mood
If only they were flesh and blood
I’d grab them if I could

When they’re done with selling
Shit by means of tit
They unveil a juicy butt
I like it, I admit

The End of the Vilewood Road (Augmented) is the fourth track from the new Cynicism Management release Tit Augmented, planned for about a year from now. Although it is the final track on the 2011 album “Tit” by Cynicism Management, it is also the fourth song to appear in the book that it has actually been written and recorded for: Cynicism Managment (A Rock & Roll Fable), to be published by River Boat Books in a few months.

I must say this was not really my favourite track on the Cynicism Management’s 2011 debut, nor was I particularly keen on performing it while the band still had a live line-up. Quite unexpectedly, however, the recent process of “augmentation” was loads of fun and far less tedious than I expected: I laughed out loud more then once while rediscovering all the fine kazoo and guitar contributions by our guitarist at the time, Aljaž Tulimirović. The mix and the overall “dramaturgy” of the track is therefore significantly different from the original: I pushed Aljaž’s contributions and many details forward, made it “move” more, and reworked the whole thing. Everything sounds much better and more interesting now, if I may say so myself. The track thus transformed from an “album filler” to the distinctively psychedelic final diatribe it is supposed to be. Admittedly, it is still a wee bit longwinded… But it will be the final track on the Tit Augmented album when it’s released, so I let it be.

THE END OF THE VILEWOOD ROAD

Iniquity (Augmented), the third track from the new Cynicism Management release planned for about a year from now, has been released on SoundCloud.

It is still one of my favourite tracks from the first Cynicism Management album, Tit, (i.e. a small bird of the paridae family, of course), which I am “renovating” for its 10th anniversary re-release, titled Tit Augmented, planned for about a year from now.

I have no idea why I was under the impression that this one would be easy to mix. Instead it was excrutiatingly tricky to get it where it is now, and it ultimately turned into an epic monstrosity with tons of automation as I tried to squeeze every ounce of dynamics out of these ten-year-old tracks while fitting in the new drum takes and making everything sound better (and more audible). In the process, I ended up changing the “dramaturgy” of the song considerably in comparison with the original track, and I must admit I’m very happy with the result. That, of course, is a subjective opinion. More realistically speaking, I hope it’s pretty decent now and that I won’t have to rework it yet again in another ten years.

More info about the project (and the reasons for it) is here .

Maybe we could all agree
that this might truly be iniquity

Life Malignant (Augmented), the second track from the new Cynicism Management release planned for about a year from now (for – blimey! – already the 10th anniversary of the original Tit), has been released on SoundCloud. More info about the project (and the reasons for it) is here.

Every weeknight
Every stage fright

Every weeknight
Is the same plight

I’m complaining whining pining
Pondering this curse
But I go on, although declining
Shitting long-shat turds

The novels Cynicism Management and Pendulum Pet have both been updated and released in most e-book stores. Pendulum Pet, previously exclusive to Amazon, has now been removed from Amazon out of solidarity with my new U.S. publisher River Boat Books, and both novels are now available, in electronic form, in most e-book stores except Amazon. The price of both books has been set to $ 3.99. Find the universal book links that will take you to the lists of all the stores the novels are available in below each cover. 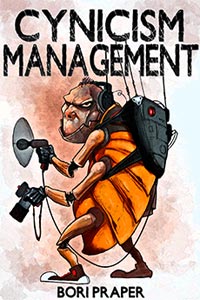 Available in the following e-book stores 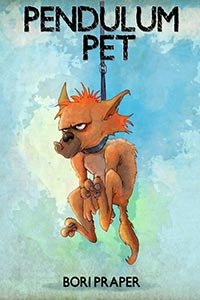