I’m overjoyed to report that yesterday I finally wrote “THE END” at the very bottom of the first draft of “Pendulum Pet”, my second novel (after my debut, entitled Cynicism Management). I concluded the novel with a short epilogue after a surprising writing spree which happened to me (of its own volition, it seemed) on Tuesday, when I managed to sit outside all they long, typing away until I had the entire 6000 words that now make up the very finale of the novel. 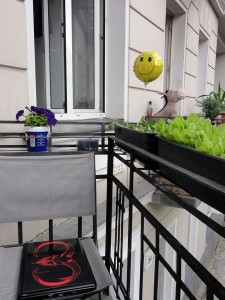 On the balcony, where I kept freezing my posterior off in this quasi-spring in Berlin, having my way with my wife’s satanic laptop, I enjoyed the company of an inflated yellow bastard named Hans, our neighbour’s currently still nameless donkey, and some figurine that the neighbour had found in a Müllhaufen somewhere (which would be a German word for “a pile of garbage”, and I find it – the word, I mean – particularly funny for some reason). As a reward for coming up with 5000 – 6000 words in a single writing session I got a nasty whiplash in my right shoulder.

Once again music will be composed for the novel as well. In fact that’s already been done, but we have yet to finish recording the vocals and then go through all the post-production torture. The same goes for the novel: I have to re-read it now and polish it a bit before sending it to a few pals who have volunteered as “alpha testers”. Should anyone else wish to receive the pre-publication manuscript and provide feedback (either the upcoming first revision or the second revision, which should be ready sometime in the autumn, probably), feel free to drop me a note.

This site uses Akismet to reduce spam. Learn how your comment data is processed.